This chapter discusses writing CSS in JS, a technique by which CSS styles and classes are defined in JavaScript rather than in separate CSS files. This technique is particularly common and useful in React, and solves a number of problems found in managing the styling of large web projects.

In November 2014, Facebook’s Christopher Chedeau gave a talk outlining many of the issues that occur when trying to develop CSS for a large application: 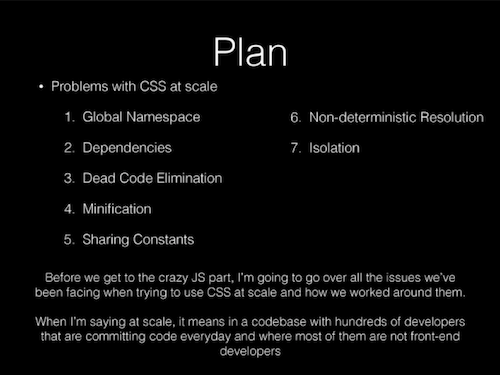 A slide from Chedeau’s talk. Click the image to view the entire deck.

In short, the talk points out how defining CSS classes in fact defines global variables: because stylesheets are loaded across the entire page, each class definition is effectively “global” and available to each Component within that page. If you define a class .button somewhere in your CSS, then every Component has access to the .button class.

The proposed solution to this problem is to define CSS style and class definition in JavaScript as JavaScript variables, and then using a library or build tool to convert those variables into properly name-spaced CSS classes that are included in the rendered DOM. This allow each Component to define its own styling (it’s just a JavaScript variable) without worrying about conflicting global variables.

Chedeau’s talk and its solution were hugely influential, marking a major shift in how web developers thought about CSS. It led to the creation of a large number of projects that provide a different ways of including CSS in JS. These libraries all do mostly the same thing, but use different syntax to solve the problem of making it easier to develop non-global CSS styles.

The easiest way to include CSS in JS using React is to use its built-in support for inline styling. You can define a CSS rule as a JavaScript object:

This coincidentally requires only a few changes from how you would normally write CSS properties: you need to camelCase property names like when you refer to DOM styling (since - isn’t a legal character in JavaScript variables); you need to put all property values in quotes, and you use , instead of ; to separate properties in the object literal.

You can then apply this object to a particular element by specifying it as the style attribute using JSX:

This is not actually defining a rule (it won’t apply to all <h1> elements), but rather is using inline styling to apply the style to only a particular element.

Normally, in non-React contexts, inline styling (specifying CSS properties in an element’s style attribute) is considered bad practice. It is difficult to modify and maintain, and leads to code duplication and poor cohesion (with style rules spread out across the program). This is part of why CSS-in-JS is considered “special”: it takes what is usually bad practice and shows how, when used in a particular way (in React), it can actually produce better code!

You can even use JavaScript objects to namespace particular “style” objects, allowing you to produce something akin to CSS classes (where you can organize and apply lots of properties at once):

Note that these aren’t real CSS classes, but rather are simply names given to styles that are applied inline. Thus you wouldn’t refer to this button as .success (or even .style.success)—it is just a classless button that has some styles applied!

React inline styles allow you to specify styling without creating global variables, but don’t provide actual CSS classes. This means that you lose some semantic meaning (since you can’t determine e.g., if a button is a “success” button just from the rendered DOM). You also lose the ability to handle more complex CSS rules, such as pseudo-classes (particularly ones like :hover or :active) and media queries.

For these features, you instead will need to use a third-party library for support CSS-in-JS. There are a wide variety of options for libraries that can be used for author robust CSS-in-JS. One of the cleanest (in the author’s opinion) of these libraries is Aphrodite, which is developed and maintained by developers at Khan Academy. This library allows you to specify CSS classes as JavaScript objects, and then apply those classes to a React element via the className attribute as normal.

You specify a collection of style classes by using the StyleSheet.create() method supplied by the library. This method is passed an object whose keys are the “class names”, similar to in the example above. You then reference the “classes” from this object by using the library’s css() function:

The Aphrodite library will take this StyleSheet you have defined and use it to automatically generate CSS class rules which are injected into the page, just as if you had to written them inside of a .css file! The above JSX code will produce DOM elements:

Note that the class names start with the name you gave it, but have a number of additional characters at the end (the _c72tod after success). These characters are a hash of the CSS properties contained within that classname, and are used to distinguish between different classes after they have been injected into the page and thus have become “global” variables. In effect, this library will automatically produce “unique names” for each CSS class you define (differentiated by a deterministic hash at the end), so you don’t need to worry about the success class in one Component interfering with the success class in another.

You can pass multiple style classes (or arrays of classes) into the css() method, and they will automatically be combined into a single unique style:

This will render an element with the DOM:

Note here that the success and hover classes have been concatenated into a single class (using -o_O- as a separator); this is to avoid any “ordering” issues—ensuring that the hover options are always applied after the success options.

Aphrodite supports a few other features and edge cases, see the documentation for details.

Aphrodite is just one of many different CSS-in-JS libraries, all of which have their own syntax. But almost all of them will either generate an inline style to inject into an element, or will produce their own injected stylesheet with auto-generated class names. In either case, you can focus on just styling the components without worrying about the CSS stepping on its own toes!

Another popular approach to solving the “global scoping” problem with CSS is to utilize CSS Modules. Rather than converting JavaScript objects into CSS styles and injecting them into the page, with CSS Modules you write your class definitions in .css files as normal. The CSS Modules then post-processes the .css files at build time (similar to how SASS works), converting the CSS classes into locally scoped versions. These locally scoped classes are then imported as JavaScript objects so that they can be referenced in a manner similar to React Inline Styles:

This will render DOM elements with unique, locally-scoped class names (similar to what Aphrodite does):

Overall, CSS Modules has the advantages of letting you write styles in .css files as usual (it’s clear where your CSS is located), can run slightly faster (since in the end, it’s just a CSS file loaded as normal), and include a few extra features that supports easy composition of classes (similar to that provided by SASS).

CSS Modules is a post-processor that “compiles” your CSS at build time, rather than at run time. Thus in order to utilize CSS Modules, you need to configure your application’s “build system” to modularize the CSS. So far, you’ve utilized Create React App to provide a no-configuration build system (using webpack behind the scenes). However, Create React App doesn’t support CSS modules by default—you need to modify the provided Webpack system to include the modularization step.

Ejecting is a one-way operation! Once you have “extracted” the build configurations, it’s impossible to put them back (short of creating a new app and copying the files over). Be sure you want to do this! Note that if you really don’t want to eject, there are other, more fragile solutions.

In order to eject your configuration information, run the following command:

You will need to make a simple change to the Webpack configuration files to support CSS Modules. In the webpack.config.dev.js file, at around line 160 (as of this writing), you will find a “rule” object with the property test: /\.css$/; this specifies what processing should be applied to .css files. Modify this property:

This is the only change you need to make to utilize CSS Modules! Now you can import CSS files into your React components as illustrated above, referring to each class as a property of the imported object which can be assigned to an element’s className attribute!

If needing to refer to classes as style.classname is tedious, you can use the react-css-modules library to simplify your React code. This library allows you to “decorate” each component with extra functionality—in particular, it allows you to use a styleName attribute to specify classes directly, without needing to namespace them:

It is also possible to automate this decorating by using babel-plugin-react-css-modules, which is a webpack plugin that will automatically process the styleName attributes in the JSX at build time (e.g., it changes how the JSX is compiled!). This provides a significant performance benefit (as well as making your code cleaner).

The other main feature of CSS Modules is the ability to compose classes—that is, you can specify that one CSS class contains all the properties defined by another. This is similar in functionality to the @extends keyword in SASS (though it only affects the classes as they are exported to JavaScript):

CSS classes are composed by specifying a composes property with a value that is the name of the class to “include”:

When applied to the previous example (the two <button> elements), this will render as two separate CSS classes:

While you can still specify just a single class in your JavaScript (e.g., className={style.success}), CSS Modules will automatically apply all of the “dependent” styles to your element!

Moreover, you can also compose CSS classes across separate files by specifying the value as coming from "filename":

In effect, you can use different files you develop your own set of Bootstrap-style utility classes!