A webpage on the internet is simply a set of files that the browser renders (shows) in a particular way, allowing you to interact with it. The most basic way to control how a browser displays content (e.g., words, images, etc) is by encoding that content in HTML.

This chapter provides an overview and explanation of HTML’s syntax (how to use it to annotate content). HTML’s syntax is very simple, and generally fast to learn—though using it effectively can require more practice.

HTML content is normally written in .html files. By using the .html extension, your editor, computer, and browser should automatically understand that this file will contain content marked up in HTML.

As mentioned in Chapter 2, most web servers will by default serve a file named index.html, and so that filename is traditionally used for a website’s home page.

As with all programming languages, .html files are really just plain text files with a special extension, so can be created in any text editor. However, using a coding editor such as VS Code provides additional helpful features that can speed up your development process.

HTML files contain the content of your web page: the text that you want to show on the page. This content is then annotated (marked up) by surrounding it with tags:

Basic syntax for an HTML element.

The opening/start tag comes before the content and tell the computer “I’m about to give you content with some meaning”, while the closing/end tag comes after the content to tell the computer “I’m done giving content with that meaning.” For example, the <h1> tag represents a top-level heading (equivalent to one # in Markdown), and so the open tag says “here’s the start of the heading” and the closing tag says “that’s the end of the heading”.

Tags are written with a less-than symbol <, then the name of the tag (often a single letter), then a greater-than symbol >. An end tag is written just like a start tag, but includes a forward slash / immediately after the less-than symbol—this indicates that the tag is closing the annotation.

Taken together, the tags and the content they contain are called an HTML Element. A website is made of a bunch of these elements.

The HTML standard defines lots of different elements, each of which marks a different meaning for the content. Common elements include:

As with every programming language, HTML includes a way to add comments to your code. It does this by using a tag with special syntax:

The contents of the comment tag can span multiple lines, so you can comment multiple lines by surrounding them all with a single <!-- and -->.

Because the comment syntax is somewhat awkward to type, most source-code editors will let you comment-out the currently highlighted text by pressing cmd + / (or ctrl + / on Windows). If you’re using a code editor, try placing your cursor on a line and using that keyboard command to comment and un-comment the line.

Comments can appear anywhere in the file. Just as in other languages, they are ignored by any program reading the file, but they do remain in the page and are visible when you view the page source.

For example, a hyperlink anchor (<a>) uses a href (“hypertext reference”) attribute to specify where the content should link to:

Similarly, an image (<img>) uses the src (source) attribute to specify what picture it is showing. The alt attribute contains alternate text to use if the browser can’t show images—such as with screen readers (for the visibility impaired) and search engine indexers.

There are also a number of global attributes that can be used on any element. For example:

Older versions of HTML (and current related languages like XML) required you to include a forward slash / just before the ending greater-than symbol. This “closing” slash indicated that the element was complete and expected no further content:

This is no longer required in HTML5, so feel free to omit that forward slash (though some purists, or those working with XML, will still include it).

An example of element nesting: the <em> element is nested in the <h1> element’s content.

The semantic meaning indicated by an element applies to all its content: thus all the text in the above example is a top-level heading, and the content “(with emphasis)” is emphasized in addition. 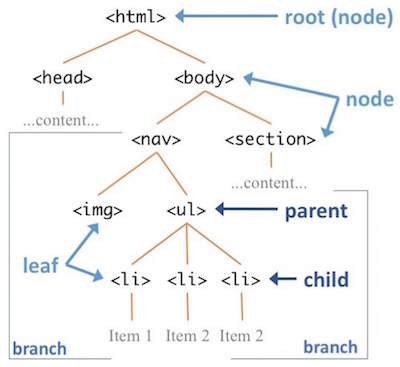 An example DOM tree (a tree of HTML elements).

In an HTML document, the “root” element of the tree is always an <html> element. Inside this we put a <body> element to contain the document’s “body” (that is, the shown content):

This model of HTML as a tree of “nodes”—along with an API (programming interface) for manipulating them— is known as the Document Object Model (DOM). See Chapter 12 for details.

Caution! HTML elements have to be “closed” correctly, or the semantic meaning may be incorrect! If you forget to close the <h1> tag, then all of the following content will be considered part of the heading! Remember to close your inner tags before you close the outer ones. Validating your HTML can help with this.

All HTML elements fall into one of two categories:

Some elements have further restrictions on nesting. For example, a <ul> (unordered list) is only allowed to contain <li> elements—anything else is considered invalid markup.

Each element has a different default display type (e.g., block or inline, but it is also possible to change how an element is displayed using CSS. See Chapter 7.

Now that you understand how to specify HTML elements, you can begin making real web pages! However, there are a few more tags you need to know and include for a valid, modern web page.

All HTML files start with a document type declaration, commonly referred to as the “Doctype.” This tells the rendering program (e.g., the browser) what format and syntax your document is using. Since you’re writing pages with HTML 5, you can declare it as follows:

<!DOCTYPE> isn’t technically an HTML tag (it’s actually XML). While modern browsers will perform a “best guess” as to the Doctype, it is best practice to specify it explicitly. Always include the Doctype at the start of your HTML files!

There are a couple of common elements you should include in the <head>:

We will discuss additional elements for the <head> section throughout the text, such as using <link> to include CSS and using <script> to include JavaScript.

Putting this all together produces the following “template” for making a web page:

You can use this to start off every web page you ever create from now on!

Also remember you can view the HTML page source of any webpage you visit. Use that to explore how others have developed pages and to learn new tricks and techniques!