Normally you’ve considered functions as “named sequences of instructions”, or groupings of lines of code that are given a name. But in a functional programming paradigm, functions are first-class citizens—that is, they are “things” (values) that can be organized and manipulated just like variables.

In JavaScript, functions ARE variables:

Important: we refer to a function by it’s name without the parentheses!

The fact that functions are variables is the core realization to make when programming in a functional style. You need to be able to think about functions as things (nouns), rather than as behaviors (verbs). If you imagine that functions are “recipes”, then you need to think about them as pages from the cookbook (that can be bound together or handed to a friend), rather than just the sequence of actions that they tell you to perform.

Thus you can define named functions in one of to ways: either by making an explicitly named function or by assigning an anonymous function to a variable:

In practice, you should always declare and define functions before you use them (put them all at the top of the file!), which will reduce the impact of hoisting and allow you to use either construction.

This is how we can create an equivalent of “member functions” (or methods) for individual objects: the dog object now has a function bark()!

Finally, functions are values, so they can be passed as parameters to other functions!

In this case, the doWithWorld function will execute whatever function it is given, passing in a value of "world".

A function that is passed into another is commonly referred to as a callback function: it is an argument that the other function will “call back to” and execute when needed.

Functions can take more than one callback function as arguments, which can be a useful way of composing behaviors.

This idea of passing functions are arguments to other functions is at the heart of functional programming, and is what gives it expressive power: we can define program behavior primarily in terms of the behaviors that are run, and less in terms of the data variables used. Moreover, callback functions are vital for supporting interactivity: many built-in JavaScript functions take in a callback function that specifies what should occur at some specific time (e.g., when the user clicks a button).

Often a callback function will be defined just to be passed into a single other function. This makes naming the callback somewhat redundant, and so it is more common to utilize anonymous callback functions:

This structure in which a function “remembers” its context (the in-scope variables around it) is called a closure. Even though the localGreeting variable was scoped outside of the aGreeterFunc, it has been enclosed by that function so it continues to be available later. Closures are one of the most powerful yet confusing techniques in JavaScript, and are a highly effective way of saving data in variables (instead of relying on global variables or other poor programming styles). They will also be useful when dealing with some problems introduced by Asynchronous Programming

Another way that functional programming and callback functions specifically are utilized is to replace loops with function calls. For a number of common looping patterns, this can make the code more expressive—more clearly indicative of what it is doing and thus easier to understand. Functional looping was introduced in ES5.

To understand functional looping, first consider the common for loop used to iterate through an array of objects:

While this loop may be familiar and fast, it does require extra work to manage the loop control variable (the i), which can get especially confusing when dealing with nested loops (and nested data structures are very common in JavaScript!)

As an alternative, you can consider using the Array type’s forEach() method:

The forEach() method goes through each item in the array and executes the given callback function, passing that item as a parameter to the callback. In effect, it lets you specify “what to do with each element” in the array as a separate function, and then “apply” that function to each elements.

JavaScript provides a number of other functional loop methods. For example, consider the following “regular” loop:

This loop represents a mapping operation: it takes an original array (e.g., of numbers 1 to 5) and produces a new array with each of the original elements transformed in a certain way (e.g., squared). This is a common operation to apply: maybe you want to “transform” an array so that all the values are rounded or lowercase, or you want to map an array of words to an array of their lengths, or you want to map an array of values to an array of <li> HTML strings. It is possible to make all these changes using the above code pattern: create a new empty array, then loop through the original array and push the transformed values onto that new array.

However, JavaScript also provides a built-in array method called map() that directly performs this kind of mapping operation on an array without needing to use a loop:

With this filtering loop, we are keeping the values for which the isEven() function returns true (the function determines “what to let in” not “what to keep out”; a whitelist), which we do by appending the “good” values to a new array.

Similar to map(), JavaScript arrays include a built-in method called filter() that will directly perform this filtering:

Because map() and filter() are both called on and produce arrays, it is possible chain them together, calling subsequent methods on each returned value:

This structure can potentially make it easier to understand the code’s intent than using a set of nested loops or conditionals: we are taking numbers and then filtering for the evens and mapping to squares!

The third important operation in functional programming (besides mapping and filtering) is reducing an array. Reducing an array means to aggregate that array’s values together, transforming the array elements into a single value. For example, summing an array is a reducing operation (and in fact, the most common one!): it reduces an array of numbers to a single summed value.

To understand how a reduce operation works, consider the following basic loop:

This loop reduces the array into an “accumulated” sum of all the numbers in the list. Inside the loop, the add() function is called and passed the “current total” and the “new value” to be combined into the aggregate (in that order). The resulting total is then reassigned as the “current total” for the next iteration.

The built-in array method reduce() does exactly this work: it takes as an argument a callback function used to combine the current running total with the new value, and returns the aggregated total. Whereas the map() and filter() callback functions each usually took 1 argument (with 2 others optional), the reduce() callback function requires 2 arguments (with 2 others optional): the first will be the “running total” (called the accumulator), and the second will be the “new value” to mix into the aggregate. (While this ordering doesn’t influence the summation example, it is relevant for other operations):

The reduce() function (not the callback, but reduce() itself) has a second optional argument after the callback function representing the initial starting value of the reduction. For example, if we wanted our summation function to start with 10 instead of 0, we’d use:

Note that the syntax can be a little hard to parse if you use an anonymous callback function:

The accumulator value can be any type you want! For example, you can have the starting value be an empty object {} instead of a number, and have the accumulator use the current value to “update” that object (which is “accumulating” information).

To summarize, the map(), filter(), and reduce() operations work as follows: 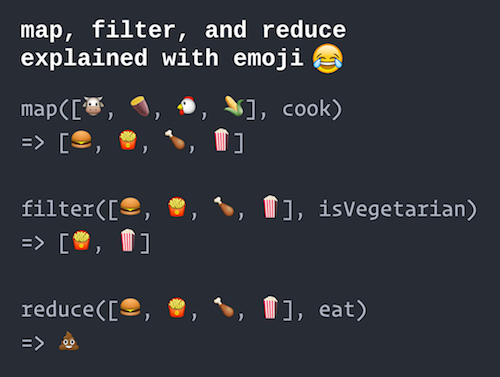 All together, the map, filter, and reduce operations form the basic platform for a functional consideration of a program. Indeed, these kinds of operations are very common when discussing data manipulations: for example, the famous MapReduce model involves “mapping” each element through a complex function (on a different computer no less!), and then “reducing” the results into a single answer.

This section was adapted from a tutorial by Dave Stearns.

A functional program sends its initial input state through a series of these pure functions, much like a plumbing system sends water through a series of pipes, filters, valves, splitters, heaters, coolers, and pumps. The output of the “final” function in this chain becomes the program’s output.

Pure functions are almost always easier to test and reason about. Since they have no side-effects, you can simply test all possible classes of inputs and verify that you get the correct outputs. If all of your pure functions are well-tested, you can then combine them together to create highly-predictable and reliable programs. Functional programs can also be easier to read and reason about because they end up looking highly declarative: it reads as a series of data transformations (e.g., take the data, then filter it, then transform it, then sort it, then print it), with the output of each function becoming the input to the next.

If you are interested in doing more serious functional programming in JavaScript, there are a large number of additional libraries that can help support that:

There are also many languages that were designed to be functional from the get-go, but can be compiled down into JavaScript to run on web browsers. These include Clojure (via ClojureScript) and Elm.